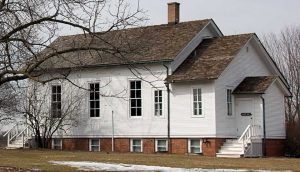 ~From the Journels of Ruth Teuscher~

Compiled from the records in the original ledgers kept by the clerks of the district. This history was written in 1980.)July 3, 1905, at the annual meeting, the first steps were taken toward building a new schoolhouse. A special meeting was called.

1905-1906, the new school is built, probably by Ben F. Yule, though no records show how the school was built. Some of Yule’s homes still stand in Somers.

After the schoolhouse was finished, coal chiefly was used for heating but in a stove, with some lesser expenditures for wood.

June 1913, Herman Tabbert painted the schoolhouse: $20.00 for work only, not including paint.

From the beginning, District No. 7 had been called Pike River, but at the annual meeting on July 7, 1919, the name was made official. “By a majority vote of the members present, the school was named the Pike River School and a report to that effect was sent to the county superintendent.”

At almost every annual meeting, repairs and improvements were approved by the voters. The building was painted regularly both inside and out. For example, in the summer of 1921, E.G. Ozanne was paid $51.70 for 128 hours of painting at $0.40 an hour, and varnish.
For the first time a special teacher of music was hired to come on two or three days a week for $12 a month. For the next 22 years, as long as the school was in operation, there was a special teacher of music. 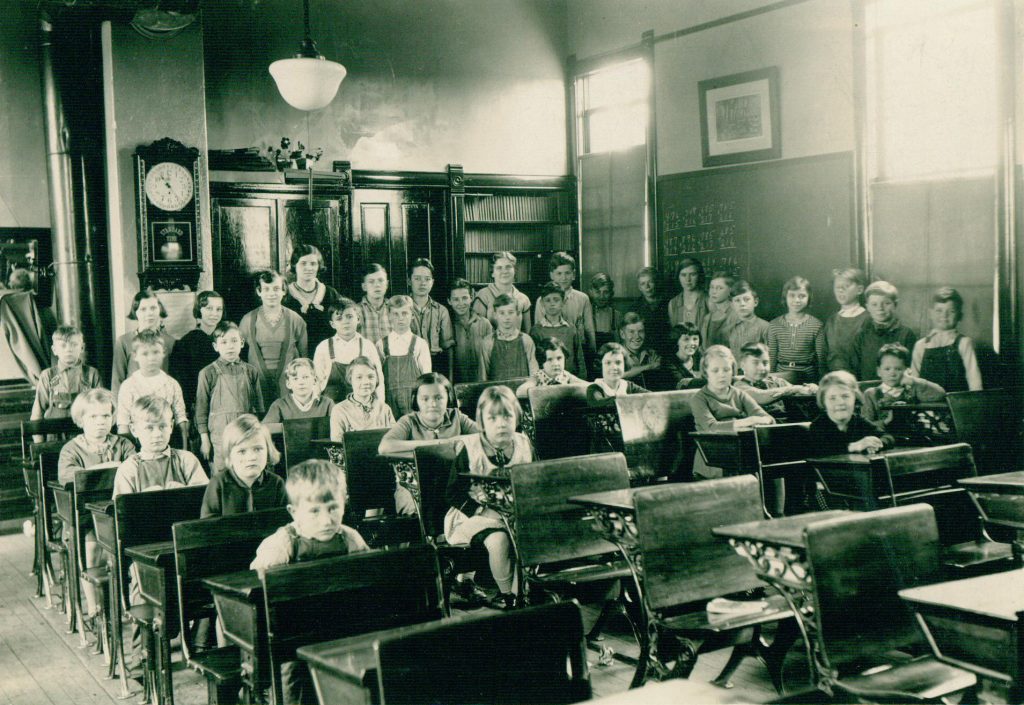 Then came the big remodeling of 1943.

Up to this time Highway A, on which the schoolhouse faced, was a dirt road with grass growing between the ruts made by wagon wheels. In 1933, the highway was surveyed, and surprisingly it was found that the front of the schoolhouse, which faced north, extended two feet onto the highway. At the same time, there was considerable feeling that the schoolhouse, now twenty-seven years old, needed improvements in addition to the new roof that had just been laid.

A sentiment meeting was held in the schoolhouse on the evening of Dec. 9, 1933 to hear the report of a committee named to investigate the possibility of improvements on the building under the Government Civil Works Administration. Mr. C.P. Heide was named chairman. Herman Arndt (superintendent of Petrifying Springs Park, a 350-acre county park one-half mile east of the school grounds) reported that the Government, under the CWA, was furnishing all labor and one-third the cost of labor for material and that the improvements considered would be very little over the amount furnished by the CWA if project was accepted.

The improvements planned were as follows: Move the building approximately 75 ft. south placing it on a new foundation with basement and adding 9 ft. to the front of the building.

Installment of water system connected to the present well.

Installation of toilet rooms for the girls and boys; installation of septic tank with proper drainage; installation of a heating plant; provide wire guards for all basement windows; leveling and surfacing the playground; removal and trimming old trees and planting new ones; and painting the building inside and outside.

The purchase of one-half acre of land was necessary in order to move the building back from the highway according to the law; the purchase price of $75.00. Paid by C.P. Heide.

Arthur Bloom, who as a boy of twelve had built fires in the 1847 schoolhouse, dug the new basement, beginning with a tractor but soon changing to a team of horses. It had been decided to excavate a deep, substantial basement, and the tractor could not get up the incline with a load but the horses could.

Deserving special recognition was Mr. C.P. Heide. Not only did he contribute from his own funds, he also lent money. Most of all, he gave moral support. He was a substantial businessman. People thought, “If he believes we can do it, we can.” He gave them confidence at a time when money was scarce. He was a leader in more ways than one.

The minutes of the annual meetings proceed routinely for the next twenty years, with regular approval by the voters of needed repairs and increasing expenditures for equipment to keep the school in accord with modern times.

About 1945 Mr. Leslie Van Natta had bought the Lawrence Ozanne farm adjoining the school grounds on the east. He became intensely interested in Pike River School, and from the time he was elected Clerk in 1949 until it ceased to be a separate district in 1962 he gave it devoted service. He superintended repairs and improvements and gave it business-like administration. Every morning for years, he went over to the school before leaving for his office in Racine, where he was a highly regarded certified public accountant. He was especially helpful in the negations by which the four districts of Pike River, Burr Oak, Bullamore Forks, and Washington consolidated to form the Somers Elementary School.

When he bought the Ozanne property, he found the old 1847 schoolhouse on it. He guarded it carefully, taking pains to keep the 1906 writing on the blackboard from being obliterated. In 1967 when this schoolhouse was moved to Hawthorn Hollow, it had sturdy tongue and groove siding on it. It had not had such siding when it was used as a school. It had to be Mr. Van Natta who had it put on after he acquired the building. The siding is still there in excellent condition.

In September 1960, the seventh and eight grade pupils at Pike River were sent to schools in Kenosha by bus because the numbers in all eight grades were too many for one teacher to handle. In September 1962, the remaining grades, one through six, began to attend the new Somers Elementary School, and Pike River School was closed.

In 1965 an emergency meeting was called, Mr. and Mrs. Christen P. Heide spontaneously came forward with a liberal donation to save the school and the Pike River grounds on which it stood. Through the years, their interest, leadership, and generosity have assured the present use of this building for historic and educational purposes.

In 1967, the Second Pike River School was moved to Hawthorn Hollow.

In 2005, the School was adopted by the Charles Heide Family further assuring the preservation and dedicated in memory of Christen P. and Anna Heide.