~From the Journals of Ruth Teuscher~

Frequently both school boys and school girls from the 1847 schoolhouse went to visit an old lady named Mrs. Peter Ozanne. She was a tiny lady who lived in a tiny house on the farm next to the school grounds. She had lived there since the 1840’s, when there were hardly any white men around, only Indians. She had been well acquainted with the Indians. The school children spent many lunch time hours listening to her stories of the Indians. The school grounds had been a favorite campground of the Indians.

The 1847 Pike River Schoolhouse was originally located one half mile north of where it stands now, through the woods on an east-west road, and used until 1906.

The 1847 Schoolhouse was made by hand of wood farmers cut from trees that grew on their land. White Oak was the best. This was White Oak country. Many White Oak trees grew in the woods around here. In the winter a farmer would cut down some trees and haul them on the snow in a big bobsled drawn by a team of horses. He would take the logs to a sawmill that stood on the river in what is now Petrifying Springs Park. The sawmill was east of where the baseball diamond is now. There the trees would be cut into boards that made the walls, doors and windows of houses and this school house.

The total cost of this schoolhouse in 1847 came to $200.00 and that included everything: lumber, nails, labor, glass for the windows. All the work was done by hand. There was no machinery of any kind to make the work easier except for the sawmill by the river.

All 8-grades were taught by one teacher. During this time, the children did not know about football, and baseball had not been invented yet. The teacher was called “Teacher,” and not by her name. “Teacher” was a term of liking and respect. Almost always the children loved their teacher, and to call her Teacher was a little like calling her Dear. The teacher not only had to teach, she also had to be the janitor – sweep the floor and make the fire. That was customary in country schools everywhere. However, Pike River School was better than most. In 1859 the district hired a boy, an eighth grader to build the fires. He was James Fink, and he lived near the school. He did it one whole winter, five months, for $1.50, that comes to thirty cents a month. 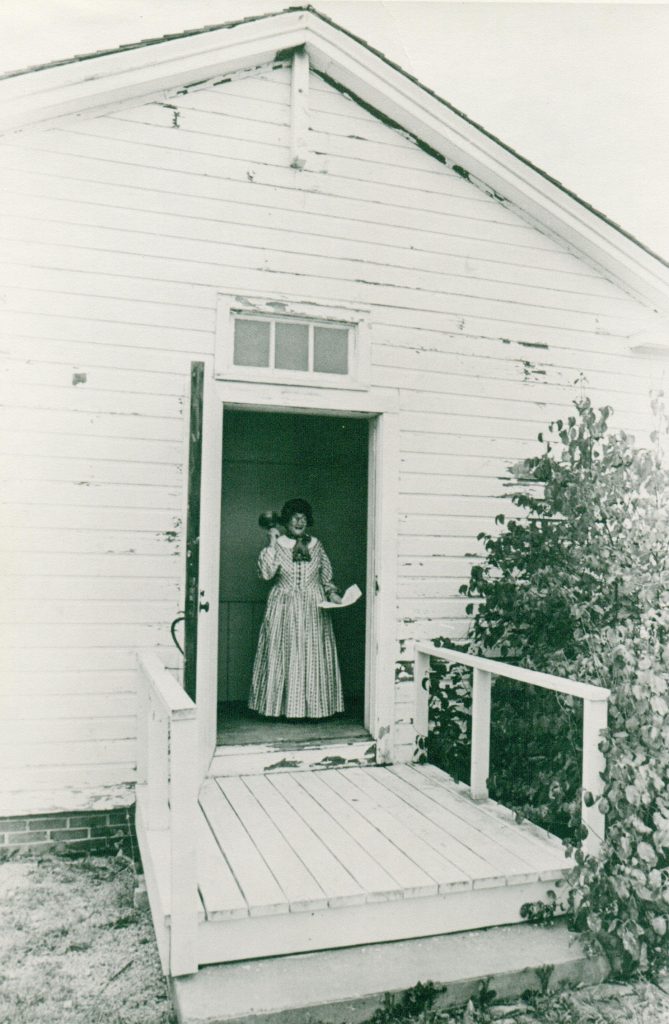 In 1901 a boy named Art Bohm had the job. He was twelve years old. He did it all winter for $5.00. He would get up at five in the morning and help with the milking and barn chores. After eating breakfast at seven he would walk a mile and a half along a dirt road, now Hwy. A over here, to the schoolhouse, where he made the fire and had the building warm when the teacher and children arrived.

When lunchtime came, children hurried to eat their lunches in no more than fifteen minutes so that they would have 45 minutes to play. During the noon recess they didn’t always play running games such as Run, My Good Sheep, Run, a variation of hide and seek or, White Man, Indian. Instead they often roamed through the woods around here. The girls might pick wildflowers. The boys hunted Indian arrowheads or fished in a deep bend of the creek they called The Swimming Hole.

Sometimes, when winter weather froze the lunches that had been stored in the cloakroom, they would have to be thawed beside the stove.

By 1905 this one room schoolhouse was too small. The larger school built just west of this smaller school was finished in May of 1906 and occupied until 1965 when the new Somers Elementary School was finished. The 1847 one room schoolhouse was sold to Lawrence Ozanne in 1906, the son of Mrs. Peter Ozanne, for $62.00. Lawrence moved the school to his farm next door for storing grain.

In 1967 the Hyslop Foundation paid $500.00 for the 1847 Pike River School and moved it here to Hawthorn Hollow to be preserved. When Hawthorn Hollow got the school, there were wires stretched under the ceiling with ears of corn drying on them and the writing was still on the blackboard after all of those years – sixty years. The original writing is no longer visible.